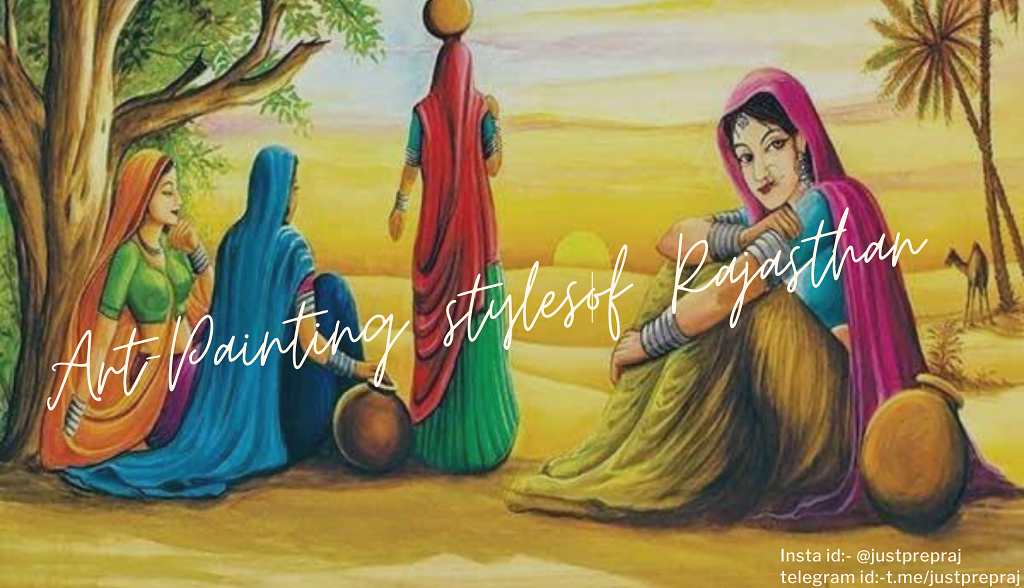 Painting is a powerful medium of expressing inner feeling and thoughts of human beings. It signifies the prevalent social belief and culture of the contemporary period.

Books like Aaghaniryukti Vriti and Dashvaikalik Sutra Churni dated Vikram Samvat 1117 and 1160 are stored in Jaisalmer. These are prominent work in the field of Indian art.

Theme:  It is the oldest and original form of Rajasthani painting. The portrayal of men and women is wealthy and good looking with sharp facial features. Moustache of men and decorated tender body of women is shown. Colorful bold depiction of nature. Influence of Mughal art was also seen.

Style: Painting consist of manuscript written over the top in black color with a yellow background.

Theme: This sub-style started with the foundation of Shri Nath ji temple in Nathdwara. It holds the beauty of combination of Mewar and Braj cultural tradition.  It involves Rajput, Mewar and Kishangarh style.

Style: Paintings were mainly based on childhood life of Krishna. The colors used in Pichhwai style are yellow and green.

Major Work: It flourished during the rule of Maharana Raj Singh. The work involves wall depiction of Krishna Bal Leela.

Style: Paintings are drawn figures of male-female formed of thick and balanced lines. The yellow color was used in abundance. A sub-style under Mewar painting style. It was first discovered by Dr Sridhar Andhare.

Major Work: Rawat of Devgarh- Dwarkadas Chundavat contributed a lot in development of this style of painting.

Style: It is considered as miniature style of south because it portrayed fountains, nature and royal luxury. Yellow color was abundantly used. Another specialty was art work on camel-hide. A distinct feature was that painters always used to mark their name and date on their piece of art.

Theme: Natural beauty, banana trees, scenes of lake, swan and duck, floating boats, and Radha Krishna conversing with each other.

Theme: The most noteworthy style of Rajasthani miniature art. The royals along with common people contributed a lot. It featured palaces and huts.

Style: The paintings resemble the work of Bikaneri sub-style. It was adopted by different people.